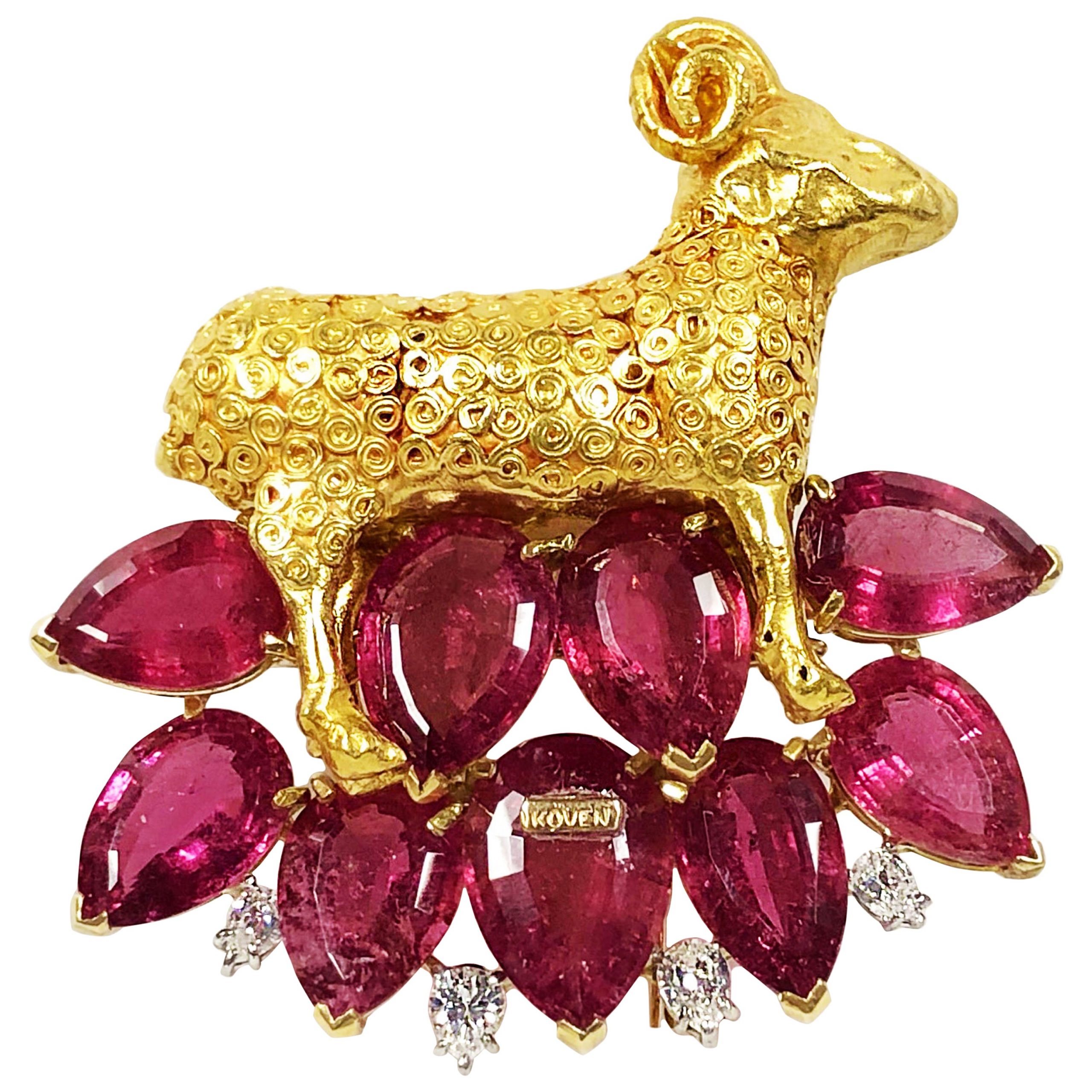 Today I discovered a new name in jewelry art. It’s Marc Koven. It has been written about him really very little. I learned briefly about his biography and career from the New York Times obituary, published in March 1970, about his family on the website of the Sousa Mendes Foundation, dedicated to honoring the memory of the Portuguese consul in Bordeaux Aristides de Sousa Mendes, who in June 1940 issued thousands of visas to refugees which allowed them to escape from advancing German forces, while his jewelry I manage to see at auction sites and digital magazine pages. Marc was born in Paris in 1903. He was familiar with the art of jewelry firsthand: Koven was descended from a long line of jewelers and engravers. After having graduated from Saint Jean Baptiste de See College in Paris and dental studies at the University of Paris, he moved to New York for an apprenticeship, obtained citizenship and married in 1931. The newly minted family returned to Paris where he opened a jewelry shop on Avenue Victor Hugo. Unfortunately he did not manage to work for long time. He closed his business at the start of World War II and served as assistant manager of an aeronautics company. Gold and platinum bracelet with emeralds and diamonds, 1955. Via Invaluable

In 1940 Marc returned to New York with his wife and son. His son’s memories about their move to the USA on the Sousa Mendes Foundation website add a personality and emotions to so dry biographical facts. In 2010 Ronald recalls: “My parents were US citizens, entitled to return to the States. We were in the Exode from Paris.  My father sent my mother and me ahead, and he stayed behind in Paris to close up our flat and the family jewelry shop.  I remember that my mother and I were in the jump seat of a car that must have belonged to acquaintances of my father. <…> My father rejoined us from Paris at Hendaye, at the Spanish border. He abandoned his Citroen there. <…> By then, I think Paris had fallen. He met my mother and me at the border and we went across Spain to Portugal. <…> We stayed for two weeks in Lisbon, waiting for the boat [SS Manhattan]. My father told me it was the last boat taking American refugees from Europe.”

In New York he founded the Koven Frères jewelry atelier on East 48th Street. A year later his creations were sold at Bergdorf Goodman and featured in Harper’s Bazaar, Vogue and Town and Country. He was considered an innovator in design and inventor of caged jewels. He was six times a winner of the annual Diamonds International jewelry design award. In 1958 Marc Koven received three awards at the Diamonds USA International Design Competition. His one of the most incredible pieces of jewelry, on my opinion, is directly related to the world’s first nuclear weapon test. Marc created it for Merle Oberon. It was a palladium hair ornament in the shape of an atom with an atomzite, a light green mineral, glassy residue left on the desert floor after the first plutonium-based nuclear bomb on July 16, 1945, near Alamogordo, New Mexico. There was a serious message behind this jewel: the famous actress put it on in response to the claims made by the Japanese government about the prolonged radioactivity of the atomzite after an explosion of the atomic bomb.

By the way, the jewelry was never released for commercial use. Taking into the consideration the nature of its origin, it was doubtful that it would become popular for decorative purposes. 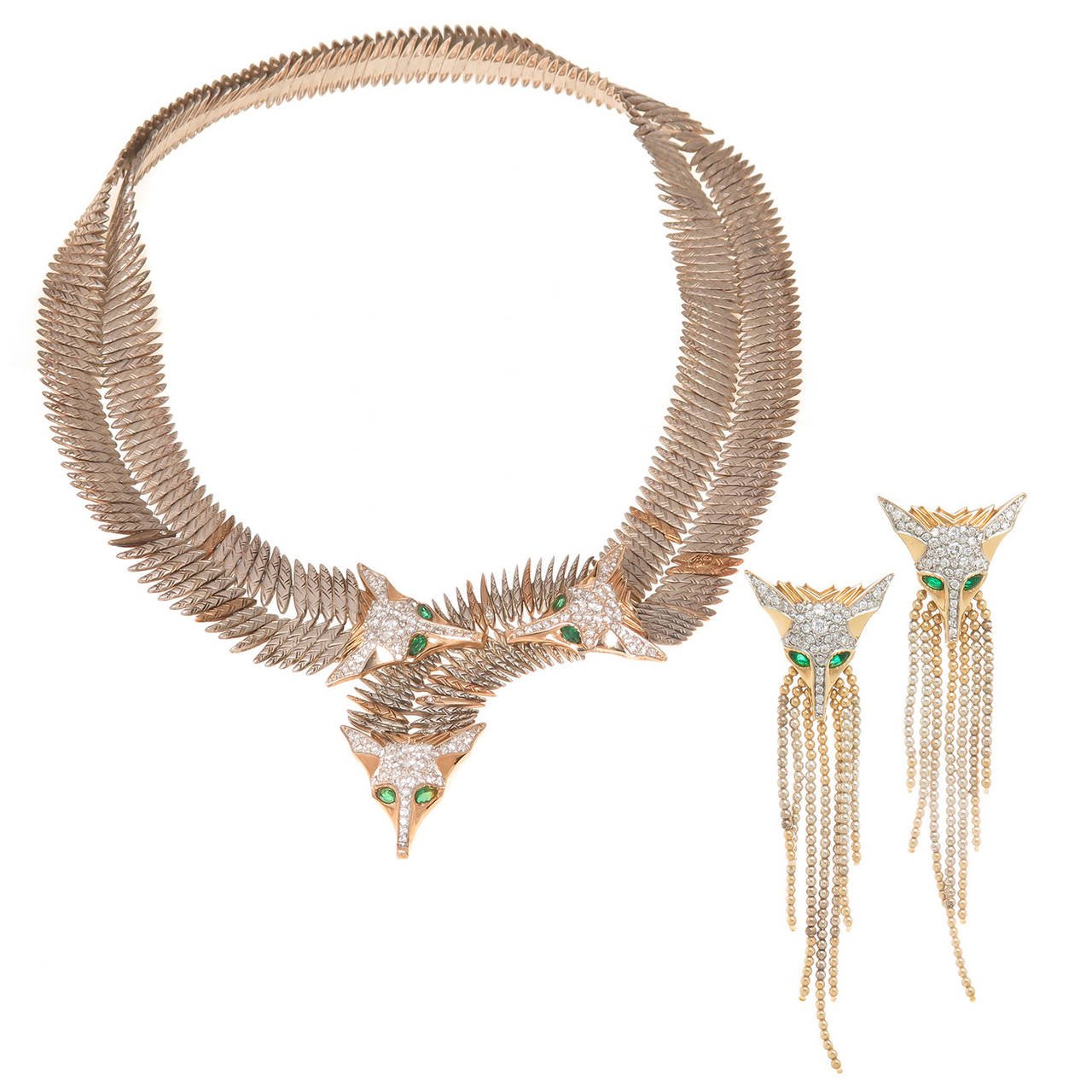 Art to wear jewellery by Erté. Favorite motifs and themes