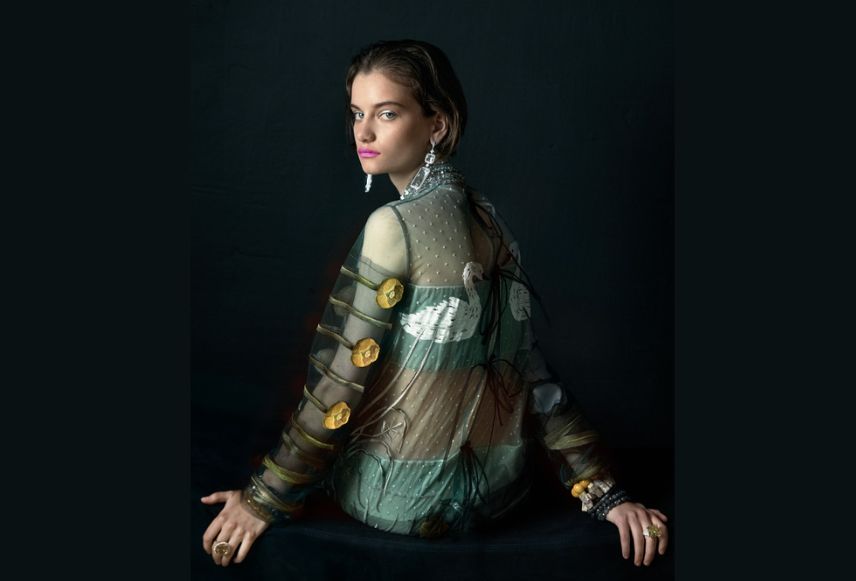 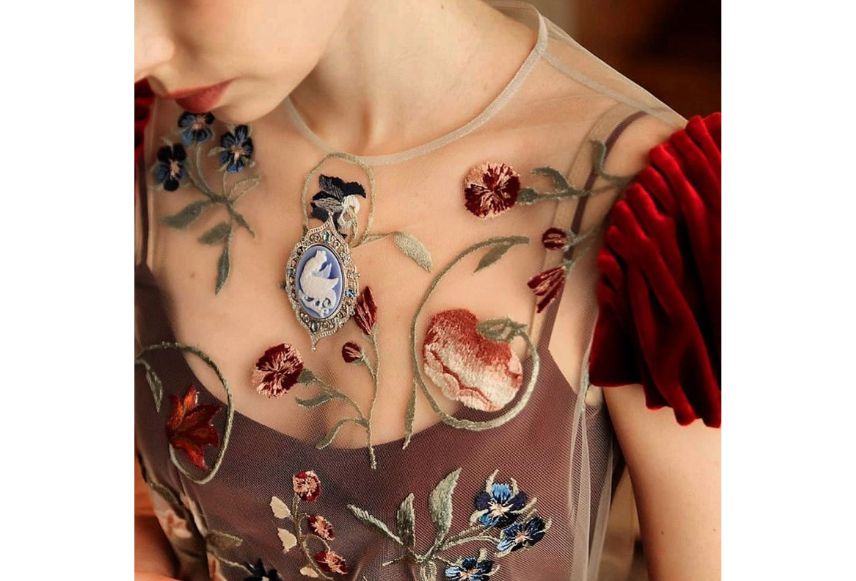 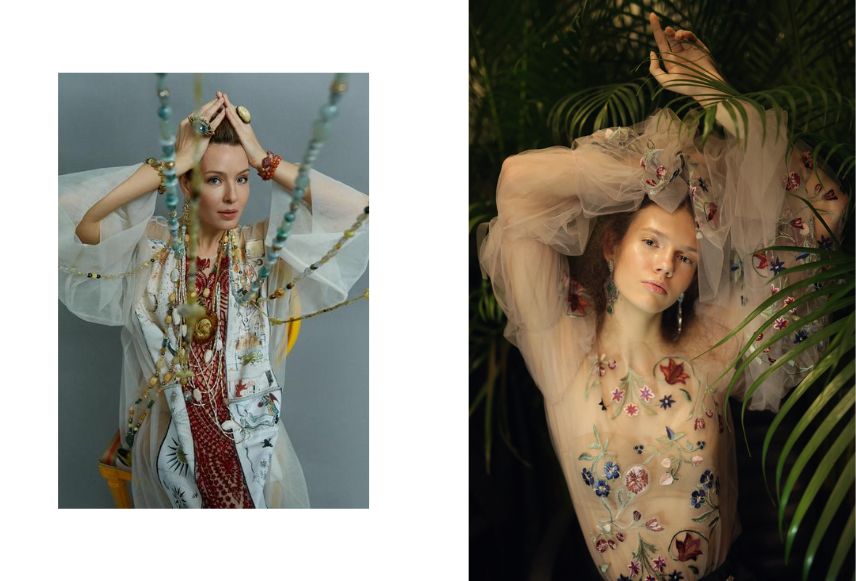 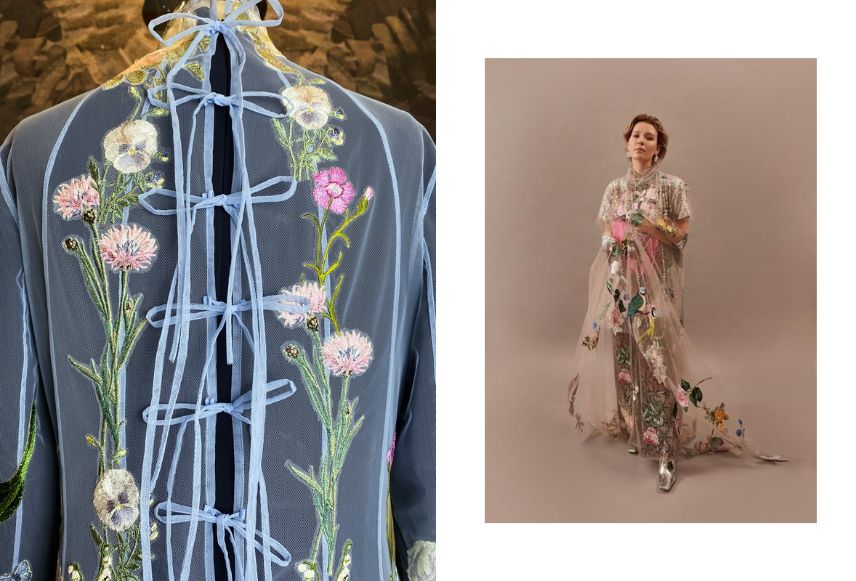 It was another gray windy December day when my flight landed at Pulkovo, an airport in Saint-Petersburg, Russia. A year ago – in 2021. Today she showed her new collection “Hysteria of art”, which inspired by ghosts of pre-war time of 1900s. But I save that for another day. Right now I want to remember what it was back then, when fairy tale was pure, not spoiled in spirit by the sadness of 2022.

The flight was early, and I wasn’t in a hurry. My meeting was agreed to start at 9 am, I still had time for a walk along Nevskii prospekt, looking at the windows with decorated shelves and mannequins screaming of sales, holidays and all sorts of fun.

The magic of embroidery

There were cafes, cheap and extremely expensive stores mixed and served together as they were. XVIII-XIX c. buildings, Soviet time, Perestroika and perfectly contemporary European aesthetics – there was no time, no one style, no one character that could possibly represent it all. I thought so, until I lost the sense of reality at the doors to Tatiana Parfionova’s Atelier. With the rising warmth of admiration I gazed at the evening gowns covered with rich picturesque embroidery.

At the hour when that city was barely woken up you couldn’t help but wonder what sort of liminal space you witnessed. A portal inside a portal – was it even real? In the snow and cold, surrounded by street dirt and noise there were dragonflies soaring above water lilies and leaves that floated with swans in a transparent lake. I could smell the summer breeze, hear the birds, feel the sun caressing my face.

The other dress was pure and minimalistic, with contrast geometry formed by heavy and transparent textiles. The last one started below the hips, it was with an applique borzoi looked with alert somewhere in the depth of the hall. Was there a rabbit hidden on another garment? I didn’t know.

The dog reminded me of the hunting scenes I loved to look through in my uncle’s books on XIX c. art. But then I was a child playing around the stories, now it was a creation of a different sort of mind. That was a fantasy but also a fashion. Wearable, contemporary, yes, meticulously made, precious but fashion. And yet there was surreal beauty, appreciation of history and delicious offering to the mind of the observers.

I called her from the street. She asked me to raise my head and look in the windows of the second floor. From the yard the sky looked grey and the roof line, walls and glass seemed antique and eternal at the same time. It could be XIX c. or XX c., or XXI c. – it existed before me and will probably stay unchanged after me… Then I saw her. My path here took exactly 15 years, an Instagram feed, a flight and a bus. In a few flights of stairs I finally shook her hand and called her by her long Russian name. Someone might find it unnecessary formal, she would prefer the simple Western manner over the traditional as well – just her first name. Her namesake brand lost that long middle part as well. But for me it was about the distance of the deepest respect, I couldn’t forget about looking at that smiling, warm and welcoming lady. She was always a visionary who opened fashion for me from another side. A side of the story – or better to say a book of stories – that writes every designer’s creation, every client, every show, every fashion editorial, even every observer who touched the garments or watched them live their lives in other people’s wardrobes.

Even if I met her in the early 1990s after her first independent collections and awards, I still would be impressed by the scale of her talent and her will to do whatever it takes to stay true to her vision and her ideas.

In the salon, which was also a dining room and a cabinet with a little desk at the fireplace, I felt like I was in the middle of an intellectual treasury – there were paintings, books, vases with blossoming flowers, and artistic chaos the owner’s two little dogs made among cosy antique furniture. We spoke about the past. The fortune and the dreams. I was recording the words, but it all seemed so easy. Almost effortless. «There was an opportunity and I took it…», «The English lord that used to come to Russia to “open our designers” bought the whole collection. He didn’t pay anyone usually, but he paid us. A lot of money for that time», «I went to the New York Fashion Week, and they liked my collection. Journalists came to see me, we sold it to Canada, and were invited to do more shows».

But in real life nothing comes easy. She got a lot of chances to restart her career abroad, to get investor’s money for her own brand and go global, to leave the poor and difficult country where at that moment there was nothing but a constant need to fight for survival. “The only Russian designer that was able to create actual trends”, according to the New York Times and WWD, decided to stay home and work not just for her own fashion house but also, often anonymously, for the big or local European brands and for the rich clients that would never share her name – the name of the Russian couturier. Not just because she wasn’t internationally recognised, but because that country’s image at the time, unlike now, was the synonym of fast money and bad taste.

“That was so sad to hear supposed to be the best compliment: ‘I couldn’t believe it was made by a Russian. I would never tell’. – remembered Tatiana Valentinovna.

“It was unfair. But fashion never meant ‘a life’ for me. It’s something that I understand how to do. The cycle, the process became almost a habit. I live in the circumstances I’ve organized for myself. It’s comfortable. As for a business it’s not for me. I try to skip “the earning opportunities” and prefer to give, than to take. I’m an artist. I like to draw. I just make it flow from me, and that’s it”.

She invented her vision – fierce and clear. And it covers much more than just clothes invention, fashion scenography or photography, there are her paintings and illustrations, little comics and books of short stories. No matter what, there are always more stories that give birth to other stories and so on. She made it all for herself, without looking for rules, trends or financial outcomes. The need to create, the feeling of fashion and the vision of time just runs through her. Their works stood up on their own. And they stayed – you can’t say what was newly made and what was created 20 years ago.

A story of a dress

The talk led us downstairs – on the first floor where the atelier and workshop were. I passed tables with sewing machines and a couple embroiderers taken by their work. From the back door we entered the atelier’s main hall with a huge desk and shelves with archival albums, fashion books and magazines. The mannequins and racks with clothes are staged according to their subject: haute couture pieces, pret-a-porter, home collection. The furniture and accessories are their own production as well. Dress from the Hermitage Museum collection. Inspired by girl’s gowns from XVIII c.

The working hours had started and assistants were buzzing at the table. When they stopped to notice us coming, I saw a dress hanging on a model in front of it.

I thought, it’s not the first dress that would leave that atelier for a museum. Some time ago there was an exhibition in the Russian Museum in Saint Petersburg.

“My client, who was very young, died of cancer. And her husband brought the dress back to me”, – she continued. – “I remember how she chose it for an event, and there he saw her. They fell in love.”

Such a sad and beautiful story! I went to the dress to look at it closer and to touch, like it would open me more of it.

“You see, the dress is very light, and the corset is embroidery, it’s not real.” – an explanation followed me. – It was inspired by a girl dress from Cathrine’s the Great time. I saw the illustration in a book about the art of embroidery based on the Hermitage museum collections”.

The embroidery was around the temperate classical flower ornament, unlike other patterns that I could see on the gowns prepared for someone’s Christmas or New Year festivities. Those were blossoming in almost 3D abundance that still life photography would envy. That dress would look like their modest older sister, but no.

The nobility of the pattern itself on flat pearly fabric, elegant lines of the cut with romantic bows along sleeves and waist, wide, falling with free folds, skirt – everything there was telling about the grace of youth and femininity. Sophisticated, a bit naive in its purity. It could come from centuries ago or from now. Timeless as everything that happens in the place. 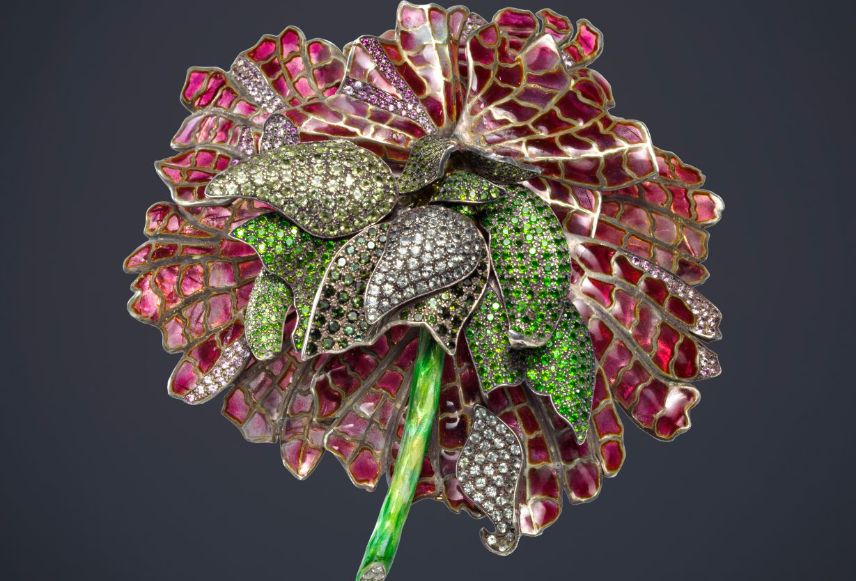 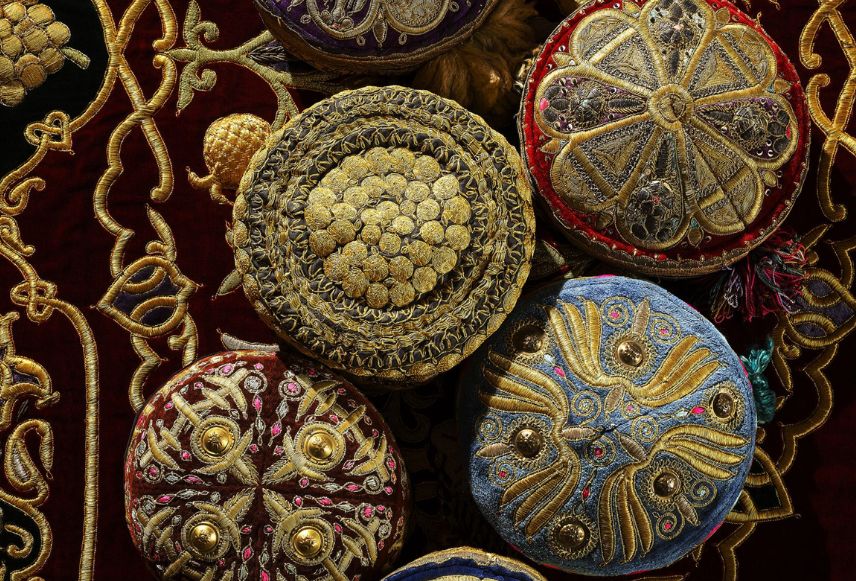 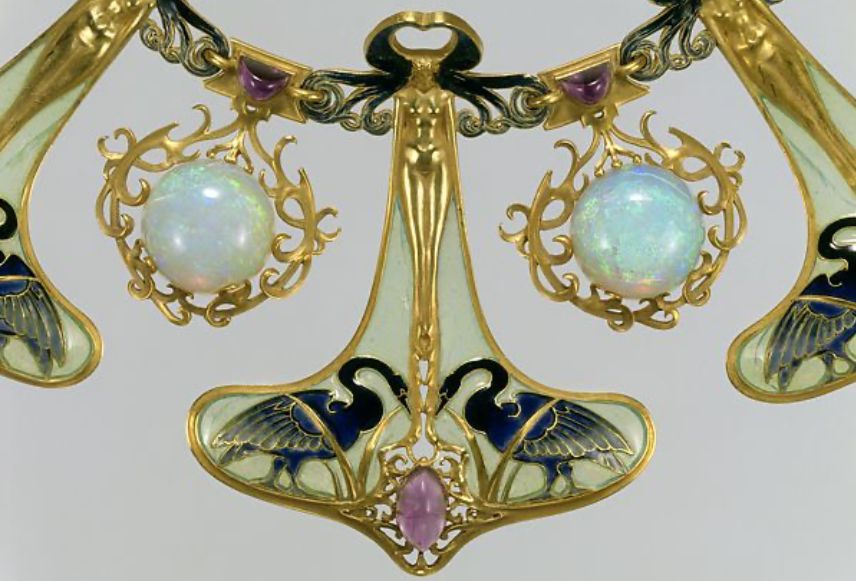